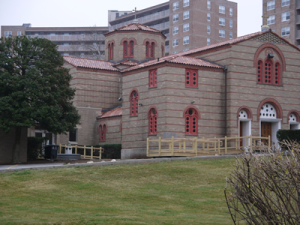 Our parish is actually the daughter of Annunciation Greek Orthodox Church.  For a variety of reasons, a number of families in the late 1920’s decided to form a new congregation. This group raised money to purchase St. Mary’s Catholic church at 434 Elm Street in August of 1928, and to establish a new parish named after the Archangels (Taxiarhai). Despite many initial growing pains and economic difficulties, our forebears were able to pay off their mortgage by 1937. A number of priests with varying talents and energy served the community during the first 35 years. There was even an attempt between 1951 and 1956 to reunite Archangels and Annunciation, but it proved to be unsuccessful.

A major turning point came with the assignment of Fr. George Poulos in 1956. Right away he convinced the parish that, instead of repairing this older structure, they should construct a new facility. A General Assembly on December 16, 1956, unanimously agreed to proceed with the purchase of property and build a church and hall. A Building Fund drive began on January 8, 1957, with an initial goal of $300,000, and was remarkably completed by the end of February with the invaluable assistance of a few major benefactors who owned shipping companies, donated generously, and offered to supervise construction.

The temple was based on a single prototype: the 11th century Byzantine church of the Holy Apostles

Groundbreaking was held on November 25, 1957, the cornerstone was laid on June 25, 1958, and the completed temple was the first consecration celebrated by Archbishop Iakovos in November 1959, newly assigned Archbishop of America. He was so impressed by what he saw that he asked Fr. George for the name of the architect and a copy of the drawings so that he could build a similar structure at our Seminary — Holy Cross Greek Orthodox School of Theology in Brookline, Massachusetts. This is why the Seminary Chapel is strikingly reminiscent, including the iconography. 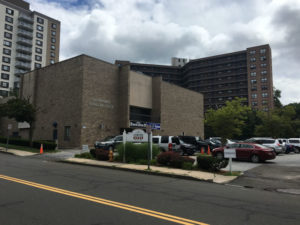 In 1976, our parish added the Greek Cultural Center for expanding fellowship (with its own banquet facility) and introducing an athletic facility that featured a full gymnasium, Olympic-sized pool, exercise & weight rooms, racquetball courts, and lockers rooms equipped with steam, sauna, and whirlpool. In 1995, this Center was transformed into the Stamford Athletic Club, one of the premier clubs in Stamford for many years. They club closed to the public in 2019.

Fr. George’s ministry spanned more than 53 years, the longest single parish tenure in the history of the Archdiocese. Along with the parish leadership, he oversaw the development of Liturgy and worship, choir and church music, Sunday School, Greek School, youth ministry, a Seniors program, clergy fellowship, and ecumenical affairs. He was a pioneer in technology, using tapes and videotapes, and televising and recording worship services. He has published numerous writings, including his popular Orthodox Saints: Spiritual Profiles for Modern Man, in four volumes; a biography of Archbishop Athenagoras Cavadas, Footsteps in the Sea; a history of the time when the Seminary was located in Connecticut, Pomfret: The Golden Decade; and a biography of Archbishop Iakovos, A Breath of God: Portrait of a Prelate. During his leadership, a number of men went to study at Holy Cross Seminary, including the following clergy: Frs. James Moulketis, Jose Velez, Stephen Zorzos, and Patric Legato. Finally, Fr. George not only had the idea for a youth program in Greece for those in America, he oversaw negotiations with the Greek Government, the Church of Greece, and Olympic Airways on behalf of our Archdiocese for the establishment of “Ionian Village” in Bartholomeo, Greece, along with its multi-faceted programs and material subsistence. 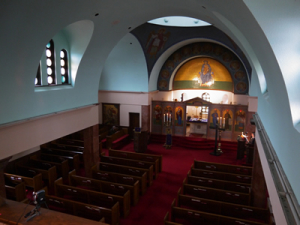 Symeon the Stylite of the Mountain

Meletios the Commander & his Companion Martyrs