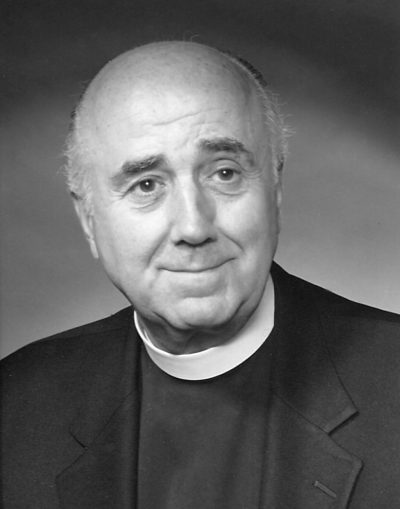 The Rev. Protopresbyter Father George Poulos fell asleep in the Lord at the blessed age of 100 this past Sunday, February 13, following a recent illness.

Stamford, and Paul Poulos and his wife Georgia of Stamford. His six cherished grandchildren, Cristina, Mary, Matthew, George, Dean and Peter. He is also survived by his sister-in-law, Ann Poulos of Waltham, MA., along with several nieces and nephews. In addition to his parents, Father George was preceded in death by his siblings: Steven, Nicholas and James Poulos, Bessie Perhonis, and Rena Zachery.

Father George was born on September 30, 1921, to Greek immigrant parents Peter and Theodora Coukis Poulos, in the small New England town of Greenfield, Massachusetts. He was the youngest of four brothers and two sisters.  Religion was always an important aspect of his childhood. Answering his calling to the priesthood in 1943, he began his studies at the Holy Cross Seminary in Pomfret, CT. There, he learned the Greek language and trained for the priesthood under the guidance of his mentor, Bishop Athenagoras Cavadas, the Dean of the seminary and dedicated faculty. He graduated in 1948 from the newly opened Holy Cross Seminary in Brookline, MA. In 1956, after seven years as pastor of the Holy Trinity Church in Norwich, CT, he was assigned to the Church of the Archangels in Stamford, CT where he served until his retirement in 2009. After a total of 61 years of dedicated, full time service to the Church, Father George continued to serve as Pastor Emeritus at the Church of the Archangels.

During his tenure in Stamford, a new 11th Century Byzantine style Greek Orthodox Church was built at the corner of Bedford and Third Streets. In 1959 it was officially consecrated by His Eminence, Archbishop Iakovos (his first, as newly assigned Archbishop of North and South America).  During the late 1960’s, Father George created the “Byzantine Fellowship” in America and served as its Executive Director for over 30 years. This organization sponsored Greek cultural events in the US, and enabled reasonably priced charter flights to Greece and pilgrimages to the Holy Land.

In 1970, Father George, together with Archbishop Iakovos, had the idea for a summer camp youth program in Greece. He oversaw negotiations with the Greek Government, the Church of Greece, and Olympic Airways on behalf of the Archdiocese for the establishment of “Ionian Village” in Bartholomeo, Greece. With multi-faceted residential campgrounds overlooking the Ionian Sea, campers traveled throughout Greece visiting many important cultural and religious sites. He served as Executive Director of the Ionian Village Summer Camp program. Over the last 50 years, more than 18,000 young, Greek American campers and staff have had the unique experience of discovering their common bonds, rich cultural history, language, and religious roots in Greece.

Then, in 1976, the Greek Cultural Center was opened on the church campus, providing full

athletic amenities for the youth of the church and banquet facilities for the community. In 1995, the Center was transformed into the Stamford Athletic Club, one of the premier clubs in Stamford, which was opened to the public as well. Then, in 1997 Father George had the foresight to establish an endowment fund for the long term stability of the Archangels parish.  The fund still continues to provide valuable resources to support the church’s mission.

Father George attended the University of Connecticut and Yale Divinity School at Berkley in New Haven. He was appointed by the Greek Orthodox Archdiocese as Vicar General of the churches in Connecticut. In 2017, he received an Honorary Doctor of Divinity degree from Holy Cross Seminary.  Fr. George also wrote numerous books pertaining to the Greek Orthodox faith.

In addition to his duties as Pastor of the Church of the Archangels, he served as a member

of the Board of Directors of Holy Cross Seminary, the Greek Orthodox Archdiocese of America, and Saint Basil’s Academy in Garrison, New York. He also served as Vice President of the Stamford Council of Churches and Synagogues, Chaplain of the Stamford Fire Department, and was a major in the United States Air Force Civil Patrol for 30 years. He was also on the Board of Directors of Woodland Cemetery.

During his spiritual leadership, a number of men from the Archangels community went on to

The greater Stamford community joins the entire Greek Orthodox faithful in expressing gratitude for Father George’s extraordinary life and gifts as we mourn the loss of such a beloved Pastor and visionary leader.

Public visitation will be held at Archangels Greek Orthodox Church, 1527 Bedford St, Stamford, CT 06905 on Wednesday, February 16, 2022, from 4:00PM to 8:00PM, with a Trisagion Service at 7:00PM. A funeral liturgy will be held at the Archangels Greek Orthodox Church on Thursday, February 17, 2022, at 9:00AM followed by the funeral service beginning at 10:30AM. The funeral will be led by His Eminence, Archbishop Elpidophoros of America. A procession will follow for the Rite of Interment at Woodland Cemetery, 66 Woodland Place, Stamford, CT.  A Makaria (catered luncheon), in memory of Father George, will follow in the Church Hall.

In lieu of flowers, donations may be made in memory of the Father George to